The best evidence suggests little or no difference in the true incidence of ADHD in different racial or cultural groups in the United States. Treatment rates, however, do vary significantly. And the diagnostic process is complicated by race and stereotype effects, and by a history of discrimination experienced and/or observed by many Black or BIPOC individuals. A clinician must be sensitive to all of this in order to deliver an accurate and effective evaluation.

Discussions of attention deficit hyperactivity disorder (ADHD), like discussions of mental and behavioral conditions generally, seldom explicitly mention race. Yet race (along with culture, ethnicity, and other social identities) is an important consideration in understanding — and properly diagnosing and treating — ADHD. It’s time we started discussing and studying it with purpose.

First, terms. No term is perfect for any group that includes diverse, cross-sectional members — and who would like to choose their own term for self-description. One common term for under-represented groups is person of color (or POC); another is BIPOC (Black, Indigenous, or Person of Color). With almost no research on Black African or Caribbean immigrants to the United States, my use of the term Black generally refers to African-Americans; I use the term BIPOC to refer to other non-white groups; and the term White, for brevity.

One enduring falsehood about race is that it is biological. We have seen this ugly untruth surface lately with suggestions that extraordinarily high COVID-19 deaths among Black American and British communities relate somehow to weak genetic immunity. That is scientific nonsense. There surely is individual variation in genetic immunity (and some family lines for inherited conditions are more common in certain socially defined groups), but infectious disease variation across socially defined race groups is largely related to social factors (differential exposure, differential health care, and so on). Genetics can identify ethnic lineages, but these bear little relation to what a given society calls a race or ethnic group.

Most research on ADHD has studied male children of European-Caucasian ancestry in North America, Europe, and Oceana. Relatively few studies specifically examine aspects of race or cultural variation, although we’ve seen a slight increase as studies of ADHD have grown. My own research is no exception. 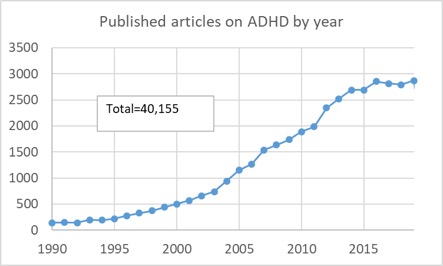 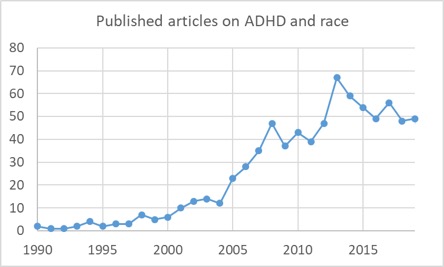 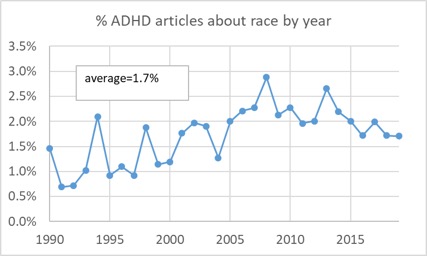 Results of simple Pub-Med search 6/8/20 for “ADHD,race” and “ADHD” from 1990-2020 show dramatic increase in total articles and corresponding percent increase in articles on race, but little change in percentage.

[Read This Next: The Children Left Behind]

In clinical care, bias in ADHD diagnoses and treatment decisions is slowly being addressed (for example, by specific training to overcome implicit bias) but still persists. The medical sectors as a whole, not just those related to ADHD, struggle to address racism, stereotyping, implicit bias, research representation, and health disparities. ADHD stigma abounds in the BIPOC community, and black individuals and families are often reluctant to participate in research due to mistrust.

The deplorable and unethical Tuskegee Study of Untreated Syphilis in the African American Male may seem like ancient history to many, but it only ended 48 years ago and it is a haunting memory within the Black community. Mistrust of research is also fueled by ongoing experiences of discrimination in research and health care settings.

Despite some progress, the fact remains that too many health-care researchers and practitioners remain inadequately aware of the best ways to serve these highly diverse communities. With the limitations on the available research in mind, here are a few things recent studies have reported specifically about race and ADHD.

How racism and stereotyping affect health and behavior.

Among American youth, concern about societal racism has risen over the last few years alongside exposure to incidents of public racism and discrimination. Recent weeks have amplified this phenomenon. Over time, exposure to discrimination and prejudice — a daily experience for many African Americans and other persons of color — is associated with a subsequent increase in symptoms of depression and ADHD, as well as a higher likelihood of trying alcohol, smoking, or marijuana. Experiencing racism or discrimination is also associated with higher blood pressure.

Children are acutely aware of stereotypes about gender and race even before they start school. Youth, like adults, are sensitive to the activation of social stereotypes and how it affects their performance. The term “stereotype threat” refers to this psychological phenomenon: Sometimes, when a member of a stereotyped group is faced with a challenging situation that matters to them and that could activate the stereotype, the threat of fulfilling the stereotype interferes with performance and they do worse on the task as a result.

How trauma and social disadvantage are related to ADHD

Trauma and social disadvantage are related to ADHD. They can trigger ADHD-like symptoms. In addition, children with ADHD are more likely to be harmed when exposed to trauma as they are less resilient. Children who are BIPOC in the U.S. are exposed to more social adversities than are White children, on average. Thus, separating adversity effects from ADHD itself is a greater challenge in these populations.

Although ADHD symptoms seem to cluster together mostly in the same way across race groups, bias is still a factor. Bias is notable in ratings of the same videotaped behavior across races of child and observer. Factors affecting ratings include role, setting, past experience of discrimination, acculturation, identity, race of rater, race of child, sex of child. (Ratings are not much affected by the rater’s prior experience of ADHD or valuing certain expressive styles).

At the same time, in rating their own children, Black parents rate their children (boys and girls) higher on ADHD symptom scales than do White parents. It is unclear whether this stems from different parent tolerance, different child behaviors, or other factors. Some standardized assessment measurements take this difference into account, but not all reflect national norms for Black children. Rater bias must be considered in an ADHD assessment.

Racial and Cultural Differences in Parenting and ADHD

Appropriate parental strategies for handling disruptive child behavior in White populations are well known and guide psychological counseling for child behavior problems accordingly. The extent to which these same methods are the right approach for Black parents and other cultural groups is less clear. In several studies, parenting styles appear to have different correlations with child outcomes depending on race and ethnicity. A more nuanced lesson from the literature appears to be that the best way of parenting to maximize for child development for ADHD may vary across race, socio-cultural context, as well as child temperament.

In addition to other barriers to care, the diagnostic process itself is complicated by race and stereotype effects, and by the aforementioned history and often by prior discrimination experienced and/or observed by Black or BIPOC individuals. A clinician must be sensitive to all of this in order to deliver an accurate and effective evaluation.

If you are in an under-represented minority group trying to understand if your child has ADHD, it is important to realize that ADHD is just as common, but harder to accurately identify, in minority groups for the reasons noted. It is therefore critical that you work with a clinician who is mindful of race-specific norms; considers the potential for implicit bias, including unconscious stereotype uses even by well-meaning educators and caregivers; understands the tendency to over-diagnose conduct disorder in African American youth with behavior problems; and also considers social dynamics and contexts such as trauma, isolation, and exposure to other important contexts.

A thorough clinician will obtain standardized ratings from multiple informants, and also consider objective evidence like grades and classwork. They look for and try to use norms for your child’s social group. They will also pay careful attention to impairment — that is, are the ADHD symptoms really interfering with the child’s development? Finally, they should know that Black youth are more likely than White to discontinue ADHD treatment or use it only intermittently for multiple reasons not well studied or understood.

On the science side, we can’t yet be sure that ADHD criteria identify children accurately across race and ethnicity. Some evidence says yes, some says not quite. Regardless, racism and stereotyping can’t be ignored if clinicians and scientists hope to accurately diagnose and truly help all children with ADHD and ADHD-like symptoms. Prejudice and bias impact our ability to get accurate evaluations of Black and BIPOC persons’ abilities and needs and, therefore, to appropriately support their growth and development. I will certainly be continuing my own efforts to learn, listen, and improve.

Additional studies that take into account race, acculturation, and identity are sorely needed. For ADHD, it is very important to continue to learn about rater effects across race groups and to evaluate the validity of different ADHD correlates, including treatment success, across populations.

Dr. Nigg is a Professor of Psychiatry at Oregon Health & Science University and a licensed clinical psychologist who has conducted federally funded research on ADHD for more than 25 years and contributed more than 200 peer-reviewed scientific articles. (The views expressed here are his own).

The ADHD Overview from ADDitude

How Brain Imaging Changes Everything — Or Not

Why Some Children on the Autism Spectrum Are Misdiagnosed with ADHD

"What's Wrong with My Child?"

Why ADHD Is Different for People of Color

“ADHD Is Not a Behavioral Disorder.”

How Is ADHD Diagnosed?