The Science Behind ‘Tapping:’ An Alternative Therapy for Focus, Concentration & Mood

From food cravings to lack of motivation, Emotional Freedom Techniques neutralizes negative emotions and frees you to move forward in life.

“Even though I feel overwhelmed when I look at my to-do list, I deeply and completely accept myself.”

“Even though I want to get up and run away instead of doing this great big math worksheet, I’m still a smart kid.”

“Even though I feel ashamed as I reflect on the day and realize how little I’ve accomplished, I know I’m a good person.”

These three sentences are examples of Emotional Freedom Techniques (EFT) setup statements, which state the challenge you want to overcome, along with a self-affirmation. EFT, also known as EFT tapping, or just tapping, is a self-help technique that is used to treat a wide variety of physical and psychological problems. It does that by focusing on an emotionally charged event (past, present, or future), while repeating a setup statement, and tapping on the endpoints of specific energy meridians in the body. (The person taps the meridians firmly, but not so hard that it hurts.) The tapping neutralizes the emotion so the person can get unstuck and move ahead with his or her life.

EFT is used for many challenges — including those that arise from the symptoms of attention deficit disorder (ADHD or ADD) — to provide rapid and lasting results. It can be done with a practitioner, or, if learned correctly, by yourself. Tapping helps with focus, procrastination/resistance, anxiety, low self-esteem, shame, stress, cravings, sleep disturbances, emotional regulation, and many other problems. I use it in my practice to help people accomplish more and feel better about themselves.

Tapping Therapy: Tweak the Body to Optimize the Brain

According to Gary Craig, who developed EFT in the early 1990s, the cause of negative emotion is a disruption in the body’s energy system. The meridian endpoints we tap on with EFT are the same ones used in acupuncture, a form of ancient Chinese medicine. The idea is that if you can stimulate the endpoint associated with a specific body part, which is in turn connected to a specific emotion, you can unblock the energy flow and neutralize the emotional charge.

Substantial research supports the efficacy of EFT. Although evidence specific to ADHD is mostly anecdotal at this time, there have been at least 50 randomized controlled trials (RCTs) that suggest that EFT helps conditions related to ADHD. EFT meets the criteria for evidence-based treatments proposed by Division 12 of the American Psychological Association for a range of issues. One RCT demonstrated that levels of the stress hormone cortisol declined 24 percent after a single EFT session, compared with a 14 percent reduction seen after talk therapy or rest.

Although ADHD is not a disorder of emotions primarily, it has strong emotional components. Haven’t most of us felt the frustration of having to spend twice as long on something as everyone else, or the shame of not delivering on our commitments, or feeling overwhelmed about a never-ending to-do list? Even procrastination has an emotional element, a palpable resistance we can feel. Kids may describe their hyperactivity as feeling squirmy, while adults may perceive it as restlessness. All these feelings are “tappable.” Other negative emotions commonly experienced by those with ADHD include anger, helplessness, fear, confusion, and hopelessness.

Co-existing conditions are present in at least two thirds of people with ADHD — anxiety and mood disorders being the most common. Mandi Freger, a Licensed Professional Counselor and former board member for the Association for Comprehensive Energy Psychology, has used tapping and other forms of energy psychology with hundreds of adults and children over the past 20 years. She notes that clients typically come in for help with anxiety or mood disorders, and have classic ADHD symptoms, including difficulty with focus and concentration.

“Many of them have anxiety over and resistance to getting work done. You can’t separate it,” she says. “Tapping helps them release tension in the body. It changes their thought energy, and retrains the brain.”

Freger has seen how tapping helps reduce hyperactivity. She recalls a young client jumping on her couch, shouting, “I have to jump! I have to jump!” After a few rounds of tapping, the child was able to sit quietly and say, “I don’t have to jump anymore.”

Be Specific About the Emotion

The key to success with EFT is being specific. The late Don Blackerby, Ph.D., author of Rediscover the Joy of Learning, suggested tapping on specific symptoms as they occur. “Even though I have ADHD, I deeply and completely accept myself” is a nice affirmation, but it won’t get you very far as a setup statement. “Even though I have been sitting at this computer for 15 minutes trying to write this article, and my thoughts are stuck in my head in a jumbled mess and won’t come out, I deeply and completely accept myself” is a much better statement. Think of the EFT setup statement as a selfie. You have to be able to see a who, what, where, and when.

It’s also important to go with the flow. If another feeling or thought comes up as you’re tapping, tap on that. An image of a parent yelling at you when you were younger might accompany feelings of shame or sadness. “Even though I’m feeling sad when I remember that time in fourth grade, sitting at the kitchen table, when Dad yelled at me for taking too long on my math homework, I deeply and completely accept myself.” It’s important to tap on whatever comes up, because current symptoms often link to past traumas.

Many negative beliefs are formed early in our development. Maybe we’ve been repeatedly told that we’re lazy and need to try harder. After a while, we begin to believe it. We get the idea that we don’t measure up, that we’re not good enough. These beliefs are often unconscious. With tapping, they’re brought to the surface, so they can be resolved.

Motivation is a block for many of us. At a high level, we may know what we want, but we’re unable to translate that desire into in-the-moment action. Creating an affirmation and tapping on it every day can help.

One of my clients recently went into business for herself. She found it hard to spend enough time on marketing activities. She knew what she had to do, and we had worked on creating structure, but she found herself getting distracted all the time. Her daily tapping affirmation? “I earn enough money to easily support myself and my family, hire people to help me, and not sweat purchases.” Sometimes negative thoughts, like “I don’t have what it takes,” popped into her mind as she went through the tapping ritual. So she tapped on them until they no longer felt true. She found that her focus increased, her fears about money disappeared, and she was able to take care of business.

One of the best things about EFT is its applicability to many issues. This is why it is such a powerful tool for ADHD, which can show up in many different ways. Consider the second grader who won’t do her homework. Mom is frustrated, Dad is angry with Mom for being frustrated, brother is sad because he doesn’t get to go outside with his sister. All those feelings can be tapped on, bringing the entire family closer together.

How to Use Tapping Therapy

One of the best things about EFT is that it can be done anywhere, at any time, and without the use of equipment, medication, or supplements. 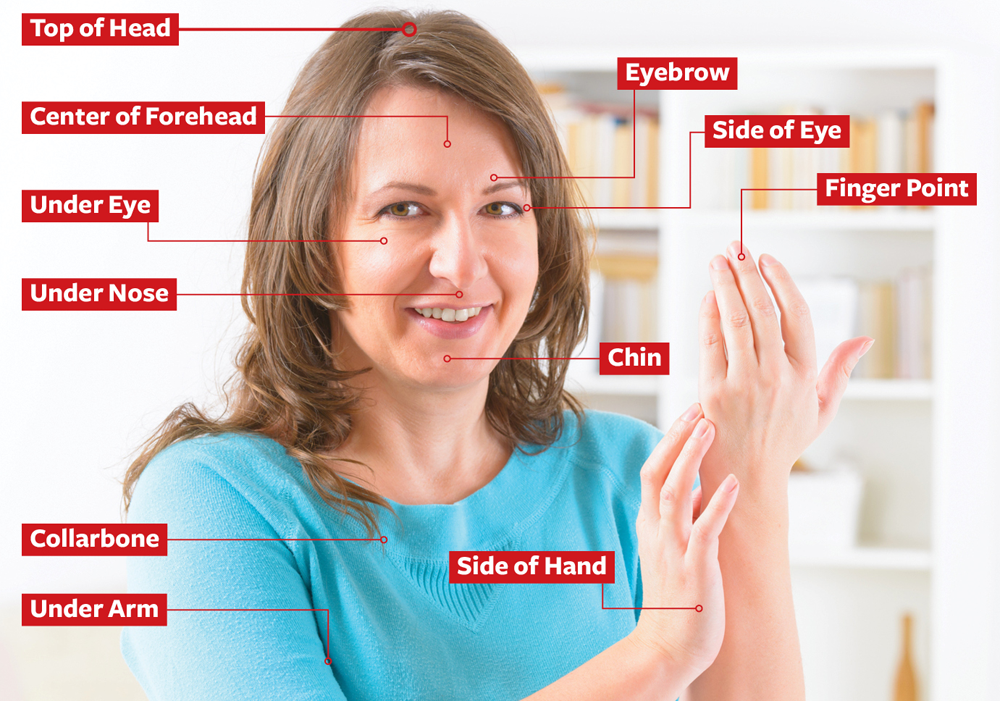 [The Case (and Means) for Holistic ADHD Treatment]

Your Child's Brain on Meditation

What Is Integrative Medicine for ADHD? A Holistic Health & Wellness Guide

The Lifestyle Factors That Ease — and Worsen — ADHD Symptoms in Children

How a “Sensory Diet” Helps My Child with Sensory Processing Disorder

21 Sensory Toys and SPD Exercises for Your Sensitive Child